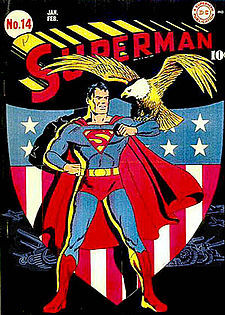 The Golden Age of Comic Books was a period in the history of American comic books, generally thought of as lasting from the late 1930s until the late 1940s or early 1950s. During this time, modern comic books were first published and enjoyed a surge of popularity; the archetype of the superhero was created and defined; and many of the most famous superheroes debuted, among them Superman, Batman, Captain America, Wonder Woman, and Captain Marvel.

The publishing of comic books became a major industry. The period also saw the emergence of the comic book as a mainstream art form, and the defining of the medium's artistic vocabulary and creative conventions by its first generation of writers, artists, and editors.

One event cited for the beginning of the Golden Age was the 1938 debut of Superman in Action Comics #1, published by National Allied Publications, a predecessor of modern-day DC Comics. Superman's creation made comic books into a major industry. Some date the start to earlier events in the 1930s: The Overstreet Comic Book Price Guide's regular publication The Golden Age Quarterly lists comic books from 1933 onwards (1933 saw the publication of the first comic book in the size that would subsequently define the format); some historians, including Roger Sabin (in Comics, Comix and Graphic Novels: a History of Comic Art), date it to the publication of the first comic books featuring entirely original stories rather than re-prints of comic strips from newspapers (1935), by the company that would become DC Comics. However, Superman, the first comic book superhero, was so popular that superheroes soon dominated the pages of comic books, which characterized the Golden Age.  Between 1939 and 1941, DC and sister company All-American Publications introduced such popular superheroes as Batman and Robin, Wonder Woman, the Flash, Green Lantern, the Atom, Hawkman, and Aquaman, while Timely Comics, the 1940s predecessor of Marvel Comics, had million-selling titles that featured the Human Torch, the Sub-Mariner, and Captain America.

Although DC and Marvel characters are more famous today, circulation figures suggest that the best-selling superhero title of the era may have been Fawcett Comics' Captain Marvel, whose approximately 1.4 million copies per issue made it "the most widely circulated comic book in America." Captain Marvel's sales soundly trounced Superman's self-titled series and Action Comics alike, and the comic at one point was issued biweekly to capitalize upon that popular interest.

Although the creation of the superhero was the Golden Age's most significant contribution to pop culture, many genres appeared on the newsstands, including humor, Western, romance, and jungle stories. The Steranko History of Comics 2 notes that it was the non-superhero characters of Dell Comics — most notably the licensed Walt Disney animated character comics — that outsold all the supermen of the day. Dell Comics, featuring such licensed movie and literary properties as Mickey Mouse, Donald Duck, Roy Rogers, and Tarzan, boasted circulations of over two million copies a month, and Donald Duck writer-artist Carl Barks is considered one of the era's major talents.

Post-war and the atomic era[]

As with World War II, the ushering in of the era following the dropping of the atomic bomb in 1945 colored the content and subject matter of comic books in the mid-to-late 1940s. One blunt example is the educational comic book Dagwood Splits the Atom, using characters from the comic strip Blondie. Superheroes with nuclear-derived powers began to emerge, such as the Atomic Thunderbolt and Atoman. In the movie serial Atom Man vs. Superman, the titular hero fought a villain named Atom Man, while Superman's weakness to kryptonite recalled the dangers of atomic radiation. Contrasting these serious characters were atomic funny animal characters such as Atomic Mouse and Atomic Rabbit. One historian argues that these cute creations helped ease young readers' fears over the prospect of nuclear war and neutralize anxieties over the questions posed by atomic power. The heroes began to fight communists, and some got involved in the Korean War.

As World War II ended the popularity of the superhero comics diminished, and in an effort to retain readers comic publishers began diversifying more than ever into war, Western, science fiction, romance, crime and horror comics. As a result, many superheroes titles were canceled:

The subsequent Silver Age of Comic Books is generally recognized as beginning with the debut of the first successful new superhero since the Golden Age, DC Comics' new Flash, in Showcase #4 (October 1956).

Community content is available under CC-BY-SA unless otherwise noted.
Advertisement